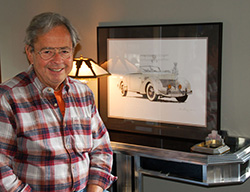 Biography … Colaizzi Design was founded by Bob in 2002, following the sale of his corporate annual report and financial communication design firm of more than 40 years. Bob’s son Tony is a close collaborator, specializing in graphic design and branding. His original music is also found on his link in this site. He is also an accomplished digital contemporary artist.Following retirement Bob designed Art Deco furnishings and then transitioned to his favorites; illustrating automobiles and aircraft.  In 2018 he exhibited at the SVRA vintage race at the Indianapolis Motor Speedway for the first time. He has exhibited in several Concours d’Elegance galleries including: The Dayton Concours,and was awarded second place in 2016 and named “featured artist” for 2018, and commissioned to create the event poster; the Cincinnati Concours (formerly Ault Park), where he was featured artist for 2016 and as such created the poster and in 2018 was awarded third place among a high quality group of artists, in 2019 he was award second place; and the Keenland Concours where he was awarded second place in 2017 and 2018.

He was named to create the poster for the 25th anniversary of the Collier Cup for MGs at Watkins Glen, and the 2015 and 2000 posters for, “Alfas at the Glen”, and is working on the poster for 2020, and nine consecutive posters for the reincarnated Put-in-Bay Road Races.

Bob became a car nut in the 1950s working in a Sinclair station at 12 Mile Road and Woodward Avenue in Detroit. Yes, the real Woodward Avenue of Dream Cruise fame. He started legal racing 32 years ago in a 1950 MGTD; then on to an Alfa Giulietta, an Alfa Duetto, three Elvas for an owner, a Lotus Super Seven, an Alfa GTjr and finally a black Alfa Spider #80 (his age when he started racing it in 2016). His SVRA racing license is #365. Bob soloed an Aeronca Champ in 1962, earned commercial, instrument and multi-engine ratings and Is currently flying aerobatics piloting a Decathlon. Bob is still a 50s hot rodder at heart with his 1932 “old school” Ford roadster.

Artistic statement … Bob’s art is created by first doing a detailed pencil drawing that is then scanned into a computer, and rendered in “digital paint,” a process that mirrors a watercolor technique. As many as fifty layers of opaque and transparent digital paint (taking about as many hours), and thousands of digital brush strokes produce Bob’s original art. “I may not be the only one doing automotive and aviation art in the digital medium, but I have not met any others,” Bob says, “This is not manipulating photographs. Period.”